Nitrogen trifluoride is one of the main gaseous fluorine carriers for etching of silicon and its compounds in the modern semiconductor industry at the manufacturing of microprocessors and solar cells.

The specialists of New Chemical Products LLC developed and patented [Patent of the Russian Federation No. 2256605] a technology for the production of nitrogen trifluoride based on fluorination with elemental fluorine of a melt of ammonium polyfluoride in a highly efficient, gradientless gas-liquid reactor:

Based on the contract and on the specification of New Chemical Products LLC, a laboratory installation was created in FSUE RRC Applied Chemistry in order to study the process of obtaining nitrogen trifluoride with a 1-liter reactor, at which experiments were carried out that allowed to formulate the main technological solutions for the proposed method.

Using the obtained results, a Pilot-Demonstration Unit with a reactor capacity of 50 liters was created at the Experimental Plant of RSC Applied Chemistry, whose test results allowed us to refine the technological parameters of the process and prepare the input data for the design of an industrial production plant.

As a result of the demonstration of the pilot unit, a licensing agreement was concluded with JSC Siberian Chemical Plant to establish a production of 300 tons of nitrogen trifluoride per year.

2. Separation of nitrogen trifluoride and tetrafluoromethane

The use of nitrogen trifluoride in the semiconductor industry imposes strict restrictions on the purity of the commercial product: usually the content of the main substance in it is 99.99%.

Purification of nitrogen trifluoride from basic impurities, such as difluorodiazines, tetrafluorohydrazine, nitrogen, fluorine, hydrogen fluoride, nitrous oxide, is carried out by traditional methods for chemical technology and does not cause any difficulties.

A pilot unit has been created, the results of the study on which have allowed to clarify the technological parameters of the process and prepare the initial data for the design of an industrial plant for production. As a result of demonstrating the work of the pilot plant, a license agreement was concluded with JSC Siberian Chemical Combine for the creation of a unit for the purification of nitrogen trifluoride from tetrafluoromethane.

A set of certified analytical methods was developed In order to provide analytical control of the production of New Chemical Products LLC.

The main by-product of the production of nitrogen trifluoride is an ammonium polyfluoride, which can be processed to produce hydrogen fluoride.

The technologies were implemented on a pilot scale at the Experimental Plant of FSUE RRC Applied Chemistry, where these fluorides were produced, in particular, under contracts with the Dutch company Bükem. The content of the main substance in the released batches was from 99.9 to 99.99%.

By the order of JSC Siberian Chemical Plant, the specialists of LLC NCP in cooperation with the accredited analytical laboratory of FSUE RRC Applied Chemistry have developed and certified the method of analysis of tungsten hexafluoride. 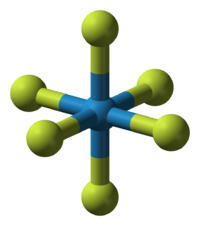